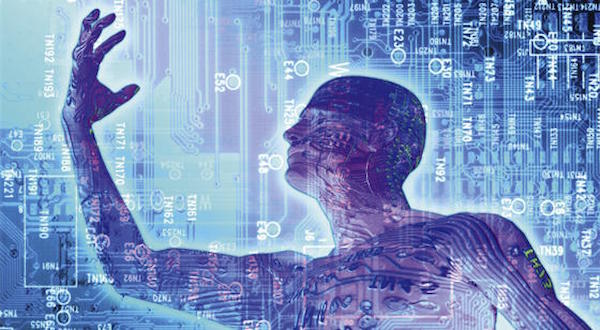 The human species can, if it wishes, transcend itself—not just sporadically, an individual here in one way, an individual there in another way, but in its entirety, as humanity. We need a name for this new belief. Perhaps transhumanism will serve: man remaining man, but transcending himself, by realizing new possibilities of and for his human nature. —Julian Huxley, “Transhumanism,” 1957 “Meat is messy.” That was one of the first things I heard as I arrived at the 2009 Singularity Summit in New York City. The speaker on the stage was Anna Salamon, a researcher at the Singularity Institute for Artificial Intelligence, and she was addressing a crowd of eight hundred or so (mostly men) on the subject of “Shaping the Intelligence Explosion.” The conference is about the future, but the setting was decidedly historic. We were sitting in the beautiful auditorium at the 92nd Street Y, a building that has seen, since its founding in 1874, many great figures pass through its doors—cultural icons such as poets T. S. Eliot and Dylan Thomas, dancer Martha Graham, and cellist Yo-Yo Ma; social and economic leaders such as Gloria Steinem and Bill Gates; and political figures such as Mikhail Gorbachev, Jimmy Carter, and Kofi Annan. On this day, it was playing host to a new species of intellectual known as the transhumanists, who see in the explosion of information technology a new and hopeful future on the near horizon, a future so different from what has come before that it has been dubbed “post-human” or “transhuman.” The term “transhumanism” was coined in an essay of the same name by evolutionist Julian Huxley in 1957. Huxley, whose humanist convictions ran deep, called for a new exploration of human nature and its possibilities rooted in our understanding of evolution. This new evolutionary adventure, he suggested, might best be labeled “transhumanism.” But even Huxley might have raised an eye- brow at the statement I heard as I walked into the auditorium that day. Meat is messy. Its meaning, however, is revealing. “Meat,” for those not schooled in cyberpunk slang, means simply the biological body and all of its strange and bothersome whims and weaknesses. The body is meat—squishy, biological stuff. In contrast to digital worlds and virtual realities, the body is relatively stationary, hard to change, easy to damage. In a word: messy. Sure, it might seem a crude term to describe something so intimate as our living, breathing bodies, but for those who see the future in the bits and bytes of digital information, the body, as currently constructed, is part of evolution’s past. The future is altogether different—free, open- ended, and unconstrained by the physical and temporal limitations of the flesh. William Gibson, science-fiction writer and hero to nerds everywhere, popularized “meat” as a term for the biological body. In the 1980s, his book Neuromancer was an instant classic, presaging the themes of the movie The Matrix by well over a decade, and Gibson became a prophet to the first tech-savvy generation in history. In the book, the main character, Case, steals from his employers and they respond by destroying his ability to enter virtual reality, prompting this passage describing his fate:

They damaged his nervous system with a wartime Russian mycotoxin. . . . The damage was minute, subtle, and utterly effective. For Case, who’d lived for the bodiless exultation of cyber- space, it was the Fall. In the bars he’d frequented as a cowboy hotshot, the elite stance involved a certain relaxed contempt for the flesh. The body was meat. Case fell into the prison of his own flesh.

What happens during evolution? Entities get more complicated. They become more knowledgeable and more creative, more capable of higher levels of emotions, like love. What do we mean by the word God? God is an ideal meaning infinite levels of all of these qualities. All-knowing. Infinitely beautiful. Infinitely loving. And we notice that through evolution, entities move towards infinite levels, never really achieving them, staying finite but exploding exponentially to become more and more knowing, more and more creative, more and more beautiful, more and more loving, and so on—moving exponentially towards this ideal of God but never really achieving it.

The implications of the Law of Accelerating Returns is that intelligence on Earth and in our solar system will vastly expand over time. The same can be said across the galaxy and throughout the universe. . . . So will the universe end in a big crunch, or in an infinite expansion of dead stars, or in some other manner? In my view, the primary issue is not the mass of the universe, or the possible existence of antigravity, or of Einstein’s so-called cosmological constant. Rather, the fate of the universe is a decision yet to be made, one which we will intelligently consider when the time is right.

If we see intelligence as being merely the furthest result yet of a long, linear evolutionary process that will simply continue in a future trajectory, unperturbed by the consequences of its creations, then perhaps there is no reason to consider the role of intelligence in shaping the destiny of the Earth or the solar system, much less forces at a cosmic level. However, if intelligence is an emergent property in an exponential curve, another game-changer in evolution’s long history of game-changing creations, then trusting the blind forces of physics to determine the future of the universe may be no more reliable than trusting that purely “natural” forces will determine the future shape of an alpine glacier. As we are learning, the power of intelligence, for better or worse, plays a powerful role in the latter, and believe it or not, may someday play a role in the former. The only difference is scale. AN INFORMATION ONTOLOGY In his 2009 book The Nature of Technology: What It Is and How It Evolves, economist W. Brian Arthur explores the parallels between biology and technology and comes to the conclusion that they are becoming more and more synonymous over time. He points out that as our technology gets more and more sophisticated, it is beginning to look less mechanistic and more organic, taking on many of the functions and properties that we associate with living organisms. And he also points out that the more sophisticated our understanding of biology is, the more we grasp the extraordinarily subtle and complex mechanisms that make up the processes of our biological lives, the more we appreciate the essentially mechanistic nature of all of the interacting parts and processes. He writes:

@carter_phipps On how difficult it is for us moderns to comprehend the possibility that earlier humans occupied qualitatively different mindspaces than we do.

A Brief History of Philosophy

US clean power production by state