Jimena Canales: Einstein, Bergson, and the Great Debate about Time

Once upon a time, Henri Bergson had the world at his feet. In the early part of the twentieth century, he was the philosopher du jour—celebrated in popular culture, his advice trusted by powerful figures of the day, his lectures attended by thousands, and his writings studied in the salons for which Paris was famed. Yet today, people hardly remember him. And the reason for his diminishment in the annals of history? In a word, Einstein.

I have been an admirer of Bergson for many years and featured some of his ideas in my book Evolutionaries, but it was only when I recently came across a book by historian of science Jimena Canales that I fully understood why he gets so little love these days. In The Physicist and the Philosopher: Einstein, Bergson, and the Debate that Changed Our Understanding of Time, Canales tells the story of a very public clash between the then-respected philosopher and the brilliant young physicist, which culminated in a 1922 debate. The specific topic of their disagreement was the nature of time, but the underlying schism was between two fundamentally different ways of seeing the world. In fact, in some sense it represented the key intellectual fault lines of the twentieth century: between science and the humanities, physics and metaphysics, objective and subjective. And it raised critical questions about the nature and limits of science that are still relevant today.

The debate resonated through the twentieth century, and each party inspired passionate defenders. The break between Alfred North Whitehead and Bertrand Russell stemmed from this conflict. Heidegger’s book Being and Time was influenced by it. The great mathematicians of the era took sides. Einstein felt that Bergson didn’t understand him, and a generation of scholars have tended to adopt his view, hence the fall of Bergson’s star. But Bergson’s argument wasn’t with Einstein’s scientific conclusions. It was that the physicist was subtly slipping metaphysics into science. As astrophysicist and science writer Adam Frank puts it on the NPR blog Cosmos and Culture:

. . . on that day in Paris, Bergson was not criticizing Einstein’s theory [of relativity]. He was attacking a philosophy that had grown up around the theory — and that was being passed off as part of the science. It was the theory’s hidden metaphysics that Bergson challenged. Bergson told Einstein that the only proper way to unpack the full meaning of time, in all its lived richness, was through explicit philosophical investigations.

According to Bergson, Einstein was muddying the line between the findings of science and interpretive, even metaphysical, conclusions about reality.

The disagreement between these two men was more than a personal conflict. It split the intellectual community of Europe. And perhaps most importantly, it marked the emergence of science as the dominant mode of understanding reality, and the beginning of its ascendancy throughout the twentieth century. Public intellectuals in our time are rarely philosophers or humanities professors or theologians. They are almost always scientists. In Einstein’s day, science was still struggling to fully establish itself. Today, that battle is largely won. Of course, there is still plenty of anti-science sentiment that exists out there (from climate denialism to anti-vaxxers to creationists and beyond), but in the halls of academia and the heart of culture, science is victorious. And in many ways, that’s a good thing. The question is: How far do we let its influence extend? Is it time for other ways of knowing to reassert themselves?

Canales doesn’t take a strong position on the debate. But even that is somewhat revolutionary. To not condemn Bergson, in this day and age, is to raise his stature. Was Einstein wrong? Not about relativity, but about the role of subjective knowledge in the scientific endeavor? Perhaps we need to revisit not just the debate between Einstein and Bergson, but how we make meaning in a world so influenced by science and scientists. In our fascinating conversation on Thinking Ahead, Canales explained to me why the questions Bergson was raising are still so relevant today; how she hopes a new relationship can emerge between the sciences and the humanities; and why—even a hundred years after the infamous debate—taking Bergson seriously is still a risky career move. 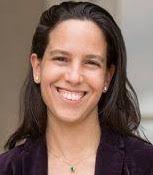 Jimena Canales is an expert in 19th and 20th century history of the physical sciences, working for a better understanding of science and technology in relation to the arts and humanities. She received an M.A. and Ph.D. from Harvard University in the History of Science and a BSc in Engineering Physics from the Tecnológico de Monterrey. Her first book, A Tenth of a Second: A History  explored the relation between science and history as one of the central intellectual problems of modern times. Her widely-acclaimed second book,  The Physicist and the Philosopher: Einstein, Bergson and the Debate That Changed Our Understanding of Time has been translated in Chinese, Greek, Spanish and excerpted in other languages. Her third book Bedeviled: A Shadow History of Demons in Science, covering four-centuries of scientific discovery, is now available. She has been widely published in the academic and popular press, and is currently a faculty member of the Graduate College at University of Illinois, Urbana-Champaign and a Research Affiliate at MIT (2017-2018).