Darryl Jones: Roads, Wildlife, and the Future of Conservation

Why did the leopard cross the road? Well, because he had to. He might have been looking for food, or a mate, or a new territory. But if he made it safely to the other side, it just might be because someone built him a bridge. And today’s guest on Thinking Ahead might have had a hand in that effort.

One of the many great challenges of this century, to my mind, is finding a way for nature to thrive alongside humans. The rise of Modernity has made an enormous difference for human thriving but has put tremendous pressure on the natural world, a pressure that we have only recently started to make the effort to mitigate. But with population growth falling, technology improving, wealth increasing, and knowledge of natural ecosystems becoming more sophisticated, there are tremendous opportunities ahead of us to find better ways to coexist with the wild. And one of the people working to do just that is Darryl Jones, a world expert on building wildlife crossings to help animals migrate safely as their territories become divided and circumscribed by human roads. His new book, A Clouded Leopard in the Middle of the Road, documents the rise of one of the newest ecological areas of study, known as Road Ecology, and shares some of the extraordinary success stories he’s been involved in, from the United States to Africa to Europe to Australia. In this episode, he explains the groundbreaking public-private cross-disciplinary partnerships that make such projects possible, and shares his personal passion for making roadkill a thing of the past. 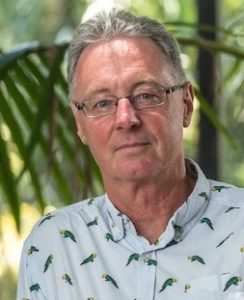 Darryl Jones is Professor of Urban Ecology and Deputy Director of the Environmental Futures Research Institute at Griffith University. His work is focused on the many and complex ways that humans interact with and understand nature. He started out with investigations of parrots as pests in crops, which led to a PhD on the behavioral ecology of Australian brush-turkeys, and that led him into the strange and largely uncharted world of urban ecology. Ten years of active engagement in building wildlife crossings around the world culminated in the writing and publication of his book A Clouded Leopard in the Middle of the Road (Cornell UP, 2018). He is also the author of The Birds At My Table (Cornell UP, 2018) Feeding The Birds At Your Table (NewSouth, 2019). Learn more about Darryl and his work here.